i’ve been thinking about this subconsciously (or refusing to keep thinking about it too long when it comes up consciously) for a while, but it has definitely come up in my grieving process in these past months.

i’ve always been pretty indpendent.  even as a kid.  i spent so much time alone.  i was a latchkey kid and frankly couldn’t wait for my mom to leave, spending the summers home alone, watching whatever i wanted on tv, acting out commercials for dishsoap, makeup infomercials in the living room mirror, whatever i wanted.

it’s what i’ve been working through recently, the effects of being surrounded by strong-willed, loud, micro-managing people… solitude is freedom.  being able to take care of myself so i don’t have to depend on anyone and put up with their shit has been very important to me for my whole life.

and so here i am:  single and childless at 36.  well educated, homeowner, starting into a good career, financially stable, healthy.  friendly introvert, excellent friendships. go-to girl, takes care of business, will always get the job done.  independent as hell.  super-single.

the local radio station has a facebook page and they had a question that sparked some conversation.  it was about these new gender stereotypes of the independent woman who has morphed into “super-bitch” and the sensitive man who has morphed into “needy, soft mama’s boy.”  they asked about the rage that has grown between the two camps and how men and women have become “too good for each other.”

in thinking about it for myself, i do consider my indpendence.  i’ve worked for a long time on what i don’t want (so much time wasted on that).  i know how well i have developed myself so there’s a certain elitist attitude about what i deserve.  obviously i’m not financially taking care of anyone (saw too much of that in my childhood).  i’m old fashioned to an extent, especially with chivalry.  on a date i pull out my wallet but if they let me pay i think it’s in poor taste.  sue me.  i like doors opened and things like that.  i know better than to consciously expect it in this day and age, but i’m keeping a mental tally (with brownie points or silent loathing).  financially, what’s really important to me is that the man is self-sufficient and responsible.  (i had an ex that was waiting out his unpaid bills in collection until they dropped off his credit report.  didn’t respect that.)  i’m not looking for someone to financially take care of my because i can take care of myself.  but i do still have some gender hang-ups around money.

the point i wanted to make here is the emotional and life independence.  what i’ve been learning through the grief is that i feel the absence of a partner who could have my back through this process.  i acknowledged to my grief counselor that i don’t feel comfortable expecting people who are not my boyfriend/husband to take care of me in the way i really need.  i don’t have a person.  someone whose responsibility it is to stand in this with me.  i’m too old to cry to my mommy all the time.  and i’m way single.  my friends are wonderful, i’m definitely not alone.  but i feel the saturation of this independence now, amplified.

taking it to the next level, what would i do if i wasn’t independent?  how would it be different?  would i be able to accept another person’s comfort in the way they express it?  what if it’s different than the way i wanted it?  i’ve put myself in this place where i’m good at distancing myself from what i don’t want, but not sure if i’m able to really have what i need.  and what does that mean?

i’ve been independent for such a long time that i’m rigid on what i expect and how i react if i don’t like what i get.  if i don’t like it, i go to retreat mode like the flip of a switch.  i can be in the same room with you, but i’m gone. but that’s easiest to do when i am by myself and can just ignore your calls, texts, messages, efforts.  ignoring and shutting out is my superpower.

that’s it.  that’s what i want to change.

that involves being more vocal.  when i don’t like something, when i know what i need and it’s not what you’re giving me, i should be courageous and ask for it.  when i don’t know what i need and you’re not giving it to me, i should try to be courageous and vocalize that. it scares me to be willing to be unsure with somebody else.  i’m supergirl, i should know everything.  in the past it has been, i don’t like it, i’m out.  i don’t like it, but i don’t know what i want instead, so get me out of here because i don’t want you to keep trying to figure it out and keep disappointing me, i’d rather go be by muself and be mad at you for not getting it.  i’d rather be right that no one gets me, reinforcing that i’m indeed alone.  too different/weird/unique/messed-up to be understood.  told you so.

4 thoughts on “independent to my detriment” 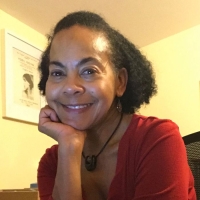 Stories of Identity, Motherhood, and Being

A Biracial Swirl in a Black and White World

Life is confounding. So is death (as observed by a mere mortal).

it started with an intercontinental blind date...

Yet Another Prostate Cancer Blog

Trying to make sense of the world, one day at a time.